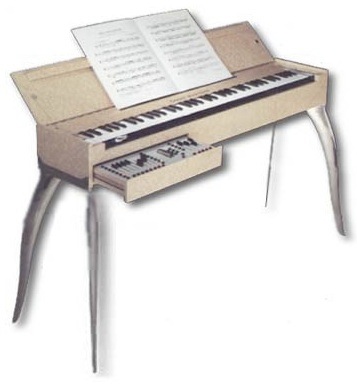 Le Martenot de Concert numérisé[/caption] Contrary to what might be imagined at first, if the Martenot was called an electronic device, the piano ought to be called a mechanical device and the organ a pneumatic device. Yet the last two are mechanically speaking more complex than the MARTENOT. Indeed the word instrument conveys the idea that there is no automatic operation, which is precisely the case. The MARTENOT is an electronic instrument since electrons play the role of reed with wind instruments or of string with bow instruments. Vital components in the circuits, the electrons "obey" the performer. Since the devices intervening between the hands of performer and the electronic part are particularly sensitive and specially designed to allow extreme ease of movements, they transmit to the sound the slightest intentions in expression with the utmost facility. Technical attributs

ACCURACY quality: can digitizing give out perfect exactitude of pitch? The MARTENOT uses it, but micro-intervals remain available whether with the ring, whose vocal playing is truly original or with the expressive keyboard (vibrato can be changed instantly, the same as with strings). Moreover, it screens the whole range of audible sounds. [caption id="attachment_2238" align="alignleft" width="150"] 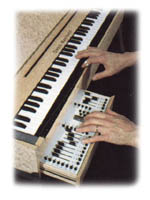 NUANCE quality : the pad of the finger (a remarkably sensitive spot), masters with the left hand all the nuances with minute push/release variations (as the bow on the string). Swift and precise attacks are provided by the strength of the hand.

Quality of the waves' breath is boundless, its POWER starting from silence can rise over a symphony orchestra. [caption id="attachment_2240" align="alignleft" width="156"] 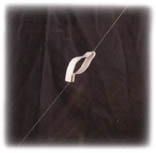 Quality of subtlety in the combinations of the eight tone families : These eight tone families can be mixed and adjusted one with the other and are also in the A,B,C,D series on the tone control board. The E,F,G,H, series provide extra modulable harmonics (unknown until then), for composers to use. Indeed, traditional instrument tone quality bas never been the aim, on the contrary new tones have been created ranging from infrasonic to ultrasonic vibrations. Each tone can be produced with a resonance that can also be altered as the performer choose. Moreover a tone pedal allows filtering of the selected combination of harmonics.